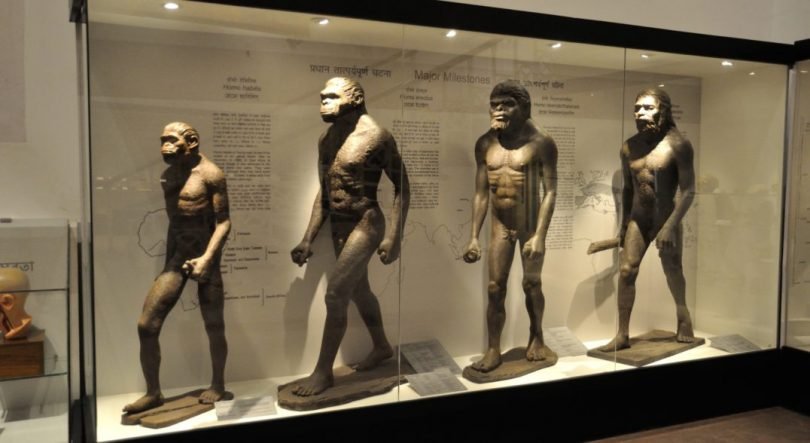 Homo sapiens evolved about 200-150,000 years ago in Africa, but our story as a species stretches back much further than that with early human ancestors. And the evolution of Homo sapiens is itself a tangled tale, full of unanswered questions and gothic family melodrama. Here are a few facts you may not know about the human evolutionary story.

Most of us have heard the story about how Homo sapiens poured out of Africa into Europe and Asia starting about 80,000 years ago. What you may not realize is that our ancestor, Homo erectus, had been taking the same routes out of Africa on and off for over 1 million years. In fact, when Homo sapiens left Africa, they would have encountered other humans who looked very much like themselves – these would be the descendents of the common ancestor we share with Neanderthals, as well as the descendents of Homo erectus. All of these people were early humans. And they had been wandering around Eurasia for hundreds of thousands of years.

How did humans really evolve?

Almost two million years ago, a band of brave explorers left their families behind in their warm,… Read more

3. You may be part Neanderthal

This is pretty widely known, but it bears repeating. Recent genetic analysis of Neanderthal bones reveals that there are some Neanderthal genes that have made their way into modern non-African populations. This suggests that when Cro-Magnons entered Europe, the Middle East and Asia, they probably had children with the local Neanderthal populations. We are all one happy human family.

A long anthropological debate may be on the cusp of resolution

Over the past half-century, our understanding of human evolution has changed dramatically. And now, … Read more

4. The human population crashed about 80,000 years ago

5. Humans navigated the Indian ocean in boats 50,000 years ago

Homo sapiens arrived in Australia roughly 50,000 years ago. How the hell did they get there from the shores of Africa? They used small boats, probably lashed together out of reeds. (Likely they were similar to the boats that brought us from Asia to the Americas over 17,000 years ago.) It was the Paleolithic equivalent of flying to the moon in a tin can. It shouldn’t have worked, but it did. Using those small boats, we crossed the Pacific many times and populated an entire continent.

15,000 years ago, humans camped in a lush Texas valley, leaving thousands of artifacts behind, from … Read more

While we’re talking about all the cool things that happened 50,000 years ago, it’s worth noting that many anthropologists now believe early humans probably did not develop what we would recognize as culture until around that time. This is amazing when you consider that the “mitochondrial Eve” theory suggests that we are all descended from one East African woman who lived about 200-150,000 years ago. Given that Homo sapiens evolved around the time of mitochondrial Eve, that means our species hung around for a really long time before we developed awesome things like art, symbolic communication, ornaments, and fancy bone tools. Certainly, pre-cultural humans had fairly sophisticated toolkits and fire, but we have very little evidence that they had art and symbolic communication, which are the cornerstones of that thing we call “culture.” Some anthropologists believe that we didn’t even invent language until that cultural explosion, but this is almost impossible to prove one way or the other.

How Mitochondrial Eve connected all humanity and rewrote human evolution

This month marks the twenty-fifth anniversary of the discovery of Mitochondrial Eve, the common…Read more

7. Homo sapiens has always used fire as a tool

Homo sapiens evolved after our ancestors tamed fire and started making tools. This sounds simple, but when you start to think about it, the implications are profound. As a species, we have never existed without one of the most important tools for building a civilization: tamed fire. As a species, we are born tool users and fire makers. Some might even say that means we were born cyborgs, because our species has always been augmented by the invention of artificially made fire and tools. Whoa.

Good news, everyone! Homo sapiens is still evolving – and one day our progeny will be as different from us as we are from Homo erectus. Evolutionary biologists have isolated a few areas of the human genome that are under rapid selection. That means mutations in those genes are spreading rapidly throughout the population. Many of these mutations are related to brain size and development, and others have to do with our ability to tolerate certain kinds of foods (like dairy) and disease resistance. This has led some biologists to wonder whether we are evolving to be more intelligent, but it is not yet clear whether the evolutionary changes we are seeing have anything to do with intelligence — especially since our brains are actually shrinking. Still, it’s good to know that that the genes which control one of my favorite anatomical systems is still evolving.