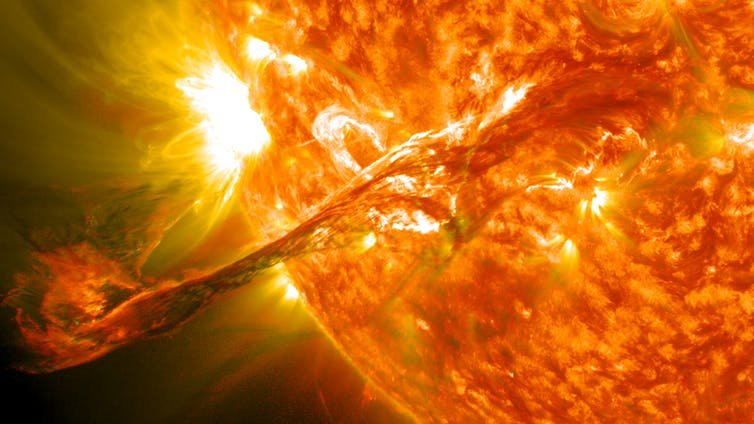 And the Sun runs to its resting place. That is the decree of the Almighty, the All-Knowing. (Surah Ya Sin, 38)

The Sun has been emitting heat for around 5 billion years as a result of the constant chemical reactions taking place on its surface. At a moment determined by Allah in the future, these reactions will eventually come to an end, and the Sun will lose all its energy and finally go out. In that context, the above verse may be a reference to the Sun’s energy one day coming to an end. (Allah knows the truth.)

The Arabic word “limustaqarrin” in the verse refers to a particular place or time. The word “tajree” translated as “runs,” bears such meanings as “to move, to act swiftly, to move about, to flow.” It appears from the meanings of the words that the Sun will continue in its course in time and space, but that this motion will continue until a specific, predetermined time.  The verse “When the sun is compacted in blackness,” (Surat at-Takwir, 1) which appears in descriptions of Doomsday, tells us that such a time will be coming. The specific timing is known only to Allah.

The Arabic word “taqdeeru,” translated as “decree” in the verse, includes such meanings as “to appoint, to determine the destiny of something, to measure.” By this expression in verse 38 of Surah Ya Sin, we are told that the life span of the Sun is limited to a specific period, one ordained by Allah. Other verses of the Qur’an on the subject read:

Allah is He Who raised up the heavens without any support – you can see that – and then established Himself firmly on the Throne. He made the Sun and Moon subservient, each running for a specified term. He directs the whole affair. He makes the Signs clear so that hopefully you will be certain about the meeting with your Lord. (Surat ar- Ra’d,2)

He makes night merge into day and day merge into night, and He has made the Sun and Moon subservient, each one running until a specified time. That is Allah, your Lord. The Kingdom is His. Those you call on besides Him have no power over even the smallest speck. (Surah Fatir, 13)

He created the heavens and the earth with truth. He wraps the night around the day and wraps the day around the night, and has made the Sun and Moon subservient, each one running for a specified term. Is He not indeed the Almighty, the Endlessly Forgiving? (Surah az-Zumar, 5)

The use of the word “musamman” in the above verses shows that the life span of the Sun will run for a “specified term.” Scientific analysis regarding the end of the Sun describes it as consuming 4 million tons of matter a second, and says that the Sun will die when that fuel has all been consumed.1 The heat and light emitted from the Sun is the energy released when matter is consumed as hydrogen nuclei turn into helium in the nuclear fusion process. The Sun’s energy, and therefore its life, will thus come to an end once this fuel has been used up. (Allah knows the truth.) A report titled “The Death of the Sun” by the BBC News Science Department says:

… The Sun will gradually die. As a star’s core crashes inwards, it eventually becomes hot enough to ignite another of its constituent atoms, helium. Helium atoms fuse together to form carbon. When the helium supply runs out, the centre collapses again and the atmosphere inflates. The Sun isn’t massive enough to fully re-ignite its core for a third time. So it goes on expanding, shedding its atmosphere in a series of bursts… The dying core eventually forms a white dwarf – a spherical diamond the size of the Earth, made of carbon and oxygen. From this point on the Sun will gradually fade away, becoming dimmer and dimmer until its light is finally snuffed out. 2

A documentary, also called “The Death of the Sun,” broadcast by National Geographic TV, provides the following description:

It (the Sun) generates heat and sustains life on our planet. But like humans, the Sun has a limited lifespan. As our star ages, it will become hotter and expand, evaporating all of our oceans and killing all life on planet Earth… The Sun will get hotter as it ages and burns fuel faster. Temperatures will increase, eventually wiping out animal life, evaporating our oceans and killing all plant life… the Sun will swell and become a red giant star, swallowing up the nearest planets. Its gravitational pull will lessen and perhaps allow Earth to escape. By the end, it will shrink into a white dwarf star, emitting a week glow for hundreds of billions of years. 3

Scientists have only recently unravelled the structure of the Sun and discovered what goes on inside it. Before that, nobody knew how the Sun obtained its energy or how it emitted heat and light. The way that such a giant mass of energy would one day consume all its energy and expire was revealed 1400 years ago in the Qur’an shows the presence of a sublime knowledge. That knowledge belongs to our Lord, Whose knowledge enfolds all things. Another verse of the Qur’an reveals: