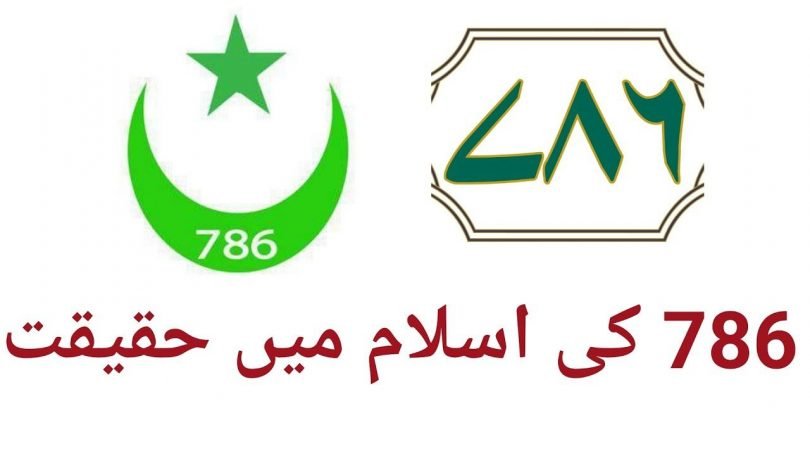 “786″ is the total value of the letters of “Bismillah al-Rahman al-Rahim”. In Arabic there are two methods of arranging letters. One method is the most common method known as the alphabetical method. Here we begin with Alif, ba, ta, tha etc. The other method is known as the Abjad method or ordinal method. In this method each letter has an arithmetic value assigned to it from one to one thousand. The letters are arranged in the following order: Abjad, Hawwaz, Hutti, Kalaman, Sa’fas, Qarshat, Sakhaz, Zazagh. This arrangement was done, most probably in the 3rd century of Hijrah during the ‘Abbasid period, following other Semitic languages such as Phoenician, Aramaic, Hebrew, Syriac, Chaldean etc.

If you take the numeric values of all the letters of the Basmalah, according to the Abjad order, the total will be 786. In the Indian subcontinent the Abjad numerals became quite popular. Some people, mostly in India and Pakistan, use 786 as a substitute for Bismillah. They write this number to avoid writing the name of Allah or the Qur’anic ayah on ordinary papers. This tradition is not from the time of the Prophet -peace be upon him- or his Sahabah. It developed much later, perhaps during the later ‘Abbasid period. We do not know of any reputable Imams or Jurists who used this number instead of the Bismillah.

The final analysis of the code 786 – it is relevant in ‘Islam for “Bismillah” AND in Hindu’s for“Hare Krishna” as personally have analyzed.
Keeping the sanctity of the Qur’an in mind 1 should, as a matter of interest, know the origin of the code 786. Nasr, the son of ‘Asim ‘al Laythiy, a great Arabic scholar, encoded the Arabic alphabet.
Strange as it might seem only code 786 caught the imagination of individuals who religiously used it over the years, even today.

The code for each letter of the Arabic alphabet reads as follows:

therefore, if encoded adds up to 786.

Some examples of modern innovations.

a. To spread brightly – coloured sheets over the graves or (perhaps) (perhaps) shrines of saints (‘auliyas) as an act of piety.

c. To participate in Urs (commemorating the death of a saint) celebrations.

What do Scholars say About The Concept of 786?

“People say the number 786 means Bismillah-ArRahman-NirRahim. But, to know something, whether it is related to Islam or not, we have to go to the basics. In this case, we have to read Quran-the Sunnah and learn what made Islam exist; how it was revealed; how it was begun Fifteen centuries ago.

Since 1440 years, Islam has been at the same pace. Muslims have been practicing the same rituals. What gives Islam this momentum? What preserves the practices and rituals of Islam? The answer is easy. Whatever was revealed and given at the time of Prophet (PBUH) that is Islam. Nobody can add or take out anything from it. Moreover, if someone innovates something in it, he would not be from Islam. Allah (SWT) says in Chapter Five: Surah Al-Maida- Al Yauma Akmaltu Lakum Deenakum. Today, I have completed your religion and made my favor upon you. And I accepted Islam to be your religion.

So, the religion was completed at the time of the Prophet. Anyone wanting to add or subtract from it must bring evidence. Then question arise, did anyone give importance to figure 786 at the time of the Prophet or his companions? The answer is NO. Nobody ever paid attention to it. So, what is this 786? This is something that came up maybe 100-200 years or some decades ago. Because Satan messed up with the minds of people who thoughtabout it as a coincidence. They initiated it most likely. They thought numbers have a secret in the Holy Qur’an, in Islam, and started finding if there is a significance of a particular set of numbers. Not only that, they wanted to cascade this over the whole religion so that it would be perfect in their sight, not knowing that’s what Satan is best in. Therefore, he messed up with their minds and convinced them to mess up the minds of others as well. So, the people gave preference to figure 21. The Qadiyani and all the cults that are not related to Islam placed great importance on figure 21, and therefore they observe fast 21 days of Ramadan.

But the truth is, all this is totally bogus and not related to Islam or any other religion. However, the tendency in the hearts of people of ignorance is to look for something unique, rare so that they would be held the torch while everyone else is looking up to them amazingly as they came up with something new. Not knowing that whoever brings such innovative things in Islam, it is rejected. Allah (SWT) would not accept that from them.

Hazrat Aisha (R.A.) narrates: “The Prophet (PBUH) says, whoever innovates in religion what is not the part of it, it is rejected.”

Some people may make some correct observations out of their good intentions to Islam but cascade this to other areas, which is wrong. So, you may find some righteous Muslims with a conclusion about a particular number of things in the Quran which, might be True. But they want to cascade this to everything. For instance, if you look at the Quran, it mentions the word ‘Day’ 365 times that is equivalent to the number of days in the year. Similarly, the “Months” are mentioned 12 times. Some might be true. But if you follow the pattern as scholars did, you will come to find that 90% of what they are saying is not authentic. Again, this is Satan showing them that this is the part of the miracles of the Quran, which, in reality, is not. Quran is not a book of Science. Rather, it is a book that is miraculous and challenging that has many miracles in it. However, it is not a book of Geology or Physics or Mathematics. It is something to give you hints of its miraculous nature.

Therefore, going back to the issue of numbers, one must stay away from these things because they are more confusing rather than being facts.

On asking about the significance of 786 in Islam, what Zakir Naik says, lets read.

Why do some Muslims write 786 for Bismillah-Ar-Rahman-Nir-Raheem? Is it correct?

Some Muslims have given numerical values for Arabic Alphabets. When you add up these values of a word, you get a particular figure. Therefore, the people who write 786, is derived by adding the value of Ba, Seen, Meem, and all the alphabets of Bismillah-Ar-Rahman-Nir-Raheem and come to the total of it, i.e. 786. Similarly, some people write 92 for Muhammad (PBUH). Is it right or wrong? I do not find any Sahih Hadeeth or any Qur’anic Verses, which agrees with the system of shortcuts. Some Muslims argue and say, since we cannot write Arabic Bismillah-Ar-Rahman-Nir-Raheem on invitation cards or on letterheads, therefore we write 786. I tell them if you cannot write it in Arabic, write its transliteration otherwise write the translation i.e. “In the name of Allah, the most beneficent and merciful.”

This sickness of the numerical value is presented to the various areas of the world. Some people consider the number 13 as unlucky while number 666 is considered as the sign for the devil.

In the Indian context, we use 420 for a person who does fraud. This 420 number has a certain logical base many of us do not know. The reason we call fraud or a person who cheats as 420 is because if he get arrested and goes to the court of law, the Indian court of law will give him punishment under Indian Panel Code 420. But unfortunately, the Muslims that migrate to America and the UK, they tag robbers of the UK as 420. However, there the number would be different and out of ignorance, people still tag them as 420.

But even if, for a minute, I agree with these people that certain Arabic Alphabets have a numerical value. Logically speaking, giving a particular number by totaling the letters of that word and using it as a short cut is Illogical! Because that same number can be used even for the words that differ in meanings. Some may be good, some may be bad.

For example, If I say, the English letter B has a numerical value of one, A has seven, and say D has four. If we add up the numerical value of Bad, it comes to 12. In the case of the word Good, G has a numerical value of 2, O=3 (3+3=6), and D= 4 as before, it also gives the answer 12. Therefore, if I use 12 as a short form for GOOD, it also means BAD. Similarly, in the case of 786, if you add up as per Arabic numeral, even it comes to 786; there are several other words and sentences whose total will come as 786. Some will be good while some will be bad. Therefore, I do not agree with any Muslim writing short cut for Bismillah-Ar-Rahman-Nir-Raheem or any Arabic word of Holy Book- Qur’an.”

786 is just a three-digit number. In the Ignorant Period known as Daur e Jahiliyat, people of Arab allot some numbers to the Arabic alphabets such as Alif is equal to 1000, Ba is to 500. By adding these numbers, they open Faal and make chits of various combinations. After that, they tell people to write a number on the back of those chits. And they believed if the number written is matched, the wish will come true. However, all this is considered forbidden in Islam.

THE NUMBER 786 in Bollywood Industry

The number 786 has been very significant but very little has been known about it. So lets dive into its significance and its connect to the Indian film industry from time to time. In Arabic there are two methods of arranging letters.One being the regular alphabetical order and the other being the ordinal method where each letter has an arithmetic value assigned to it from one to thousand. This method dates back to the 3 rd century. Now let’s look at its significance potrayed in Indian films of famous actors.

Amitabh Bachchan:
Amitabh Bachchan wore the blue shirt with the number 786 in the movie Deewar. Deewar is a 1975 Hindi action drama. It is considered as one of the ground breaking cinematic masterpiece of its time. This film had an impact on both Indian and international cinema and was remade in South Indian languages like Tamil, Telugu, Malayalam.

He also used the number 786 in another film named Coolie where he plays the role of a porter at a railway station. This film released in the year 1983, directed by Manmohan Desai. The film made over 10 million, which was a very notable achievement of its time. Other notable actor in the film is Rishi Kapoor.

Rajinikanth used the number 786 in his film Thee. It was the Tamil remake of the film Deewar acted by Amitabh Bachchan. This film released in the year 1981.

Chiranjeevi:
Actor Chiranjeevi acted in the movie Khaidi in the year 1983. It was an action revenge film. Since this movie was a big hit Chiranjeevi Khaidi No.786, which happened to be his 100 th film. Khaidi No.786 is the remake of the popular tamil film Amman Koil Kizhakale starring Vijayakanth and Radha in the lead roles.

Shah Rukh Khan:
In the 2004 film Veer Zaara, Shah Rukh Khan’s prison number was 786. It is a period romantic drama film starring Shah Rukh Khan, Preity Zinta and Rani Mukherjee in the lead roles. It was produced and directed by Yash Chopra.

Premji Amaren:
Tamil actor and comedian Premji Amaren had the number 786 in the gold plate worn by him in the popular hit Tamil movie Mankatha that had Ajith Kumar, Trisha and Arjun in the lead roles.

Ajay Devgan:
Ajay Devgan’s car number in the Hindi film Once Upon A Time was 786. It is a Hindi language gangster film directed by Milan Luthria starring Ajay Devgan, Kangana Ranaut and Emraan Hashmi in the lead roles.